Everyone seems to want to know … How did Myrtle Beach Get its name? 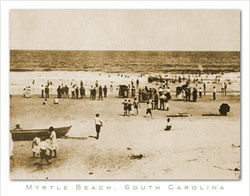 Earlier names for Myrtle Beach included Long Bay, Withers and New Town. The area was called Long Bay when a hurricane swept through in 1822. It was later known as Withers for the Withers family, which had owned property in the area since the late 1700s. A Withers post office even opened in 1888. The Burroughs and Collins Company of Conway purchased much of the Withers’ family land in 1881, and the growing community was called New Town at the turn of the century. In 1900, a contest was held to give the area an official name, and Addie Burroughs, widow of Franklin G. Burroughs, suggested Myrtle Beach because of the wax myrtle bushes growing abundantly here. That's when Myrtle Beach became Myrtle Beach. The Withers post office then was replaced by the first Myrtle Beach post office in the early 1900s.

Families began to visit Myrtle Beach more than a century ago. Myrtle Beach was sparsely populated until 1908, when a railroad was built between Conway and Myrtle Beach. The railroad ended in 1899 in the locale of Pine Island, and was extended four miles into the future city. The Pavilion, as well as the Seaside Inn, were built in today's downtown.


The natural beauty of Myrtle Beach, South Carolina has always enticed visitors Throughout the 1930s, the city grew to include areas as far north as present-day Ocean Forest. The Ocean Forest Hotel was built about this time (which was demolished in 1974). The Intracoastal Waterway began construction several years later. Almost a year later, the city was incorporated as a town in 1938 and became a city in 1957. Its name was derived from the wax myrtle shrub that grows throughout the area.


So, when you tell your friends and family that you are going to Myrtle Beach to visit, you can also give them the true meaning behind the name.